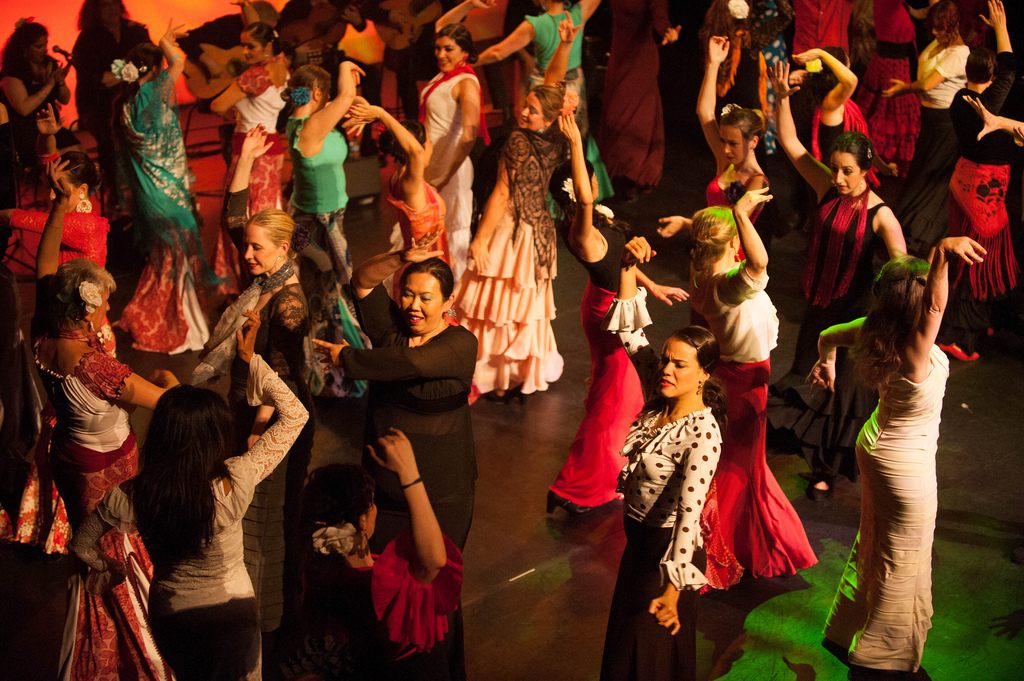 The wedding breakfast was in full swing: the guests were tucking into their main course, the ushers were on their umpteenth pint and the flamenco guitarist was playing a beautiful, sweet fandango which floated over the excited voices and clinking of glasses.  My Uncle Matthew came over to congratulate me and my husband on our marriage and to report on his conversation with the guitarist.  “I asked him which part of Spain he was from; he said, ‘Glasgow’!”

Of course, like many people, Uncle Matthew had assumed that the chap in question (who, it has to be said, does look as if he could be more Granada than Gorbals) must be Spanish because he had a fancy guitar and Cuban heels.  It is true that there are many exceptional Spanish flamenco musicians and dancers plying their trade in the UK, particularly in London, but a quick glance around one of the many flamenco classes taking place every evening and weekend would demonstrate that people of all ages, faiths, nationalities, genders and backgrounds have found something in flamenco.

It occurs to me that London (and the UK as a whole) and flamenco have one very important thing in common – they are both huge melting pots of cultures, nationalities, languages and other influences.  London has for centuries been a meeting place for people from all over the world, usually in peaceful circumstances, but often as a result of persecution or hardship elsewhere. Andalucia, which we tend to speak of as the home of flamenco, has a history of having control passed between rulers from different countries and cultures, often in not such a peaceful way.  In both cases, however, the result is a rich cultural history that has led to the constant mixing of ideas.  In Andalucia’s case, a result of that mixing was flamenco.  There are plenty of theories on the origins of flamenco and all of them probably have an element of truth.  Looking, for example, at the hand movements in Indian kathak one is reminded of the filigree fingerwork of a flamenco dancer; listening to a muezzin calling the faithful to prayer from a mosque might evoke thoughts of a martinete – it is clearly not the same thing, but the roots are there.

So what is it that draws people to flamenco?

It seems that quite a few of us start classes more by accident than by design – being taken along to a show, meeting a dancer at a party or simply going to a flamenco class because the belly dancing class was full.  A vicar I spoke to went to a community college with a friend with the intention of taking an evening class in German so as to have one evening a week when he wasn’t doing church things.  The lady at the desk went off to get the forms and by the time she came back, the vicar had spotted a poster for a flamenco course and decided that it sounded like much more fun than German language classes!

Many students have a list of dancing achievements as long as their arms, whether in ballet, tap, contemporary, jazz, kathak or belly dance, but didn’t take up flamenco until they were adults.  One dancer from the Dominican Republic decided to give up classical ballet when she moved to the UK, as she wanted to pursue her career in financial services, but found she needed to explore her creativity – flamenco turned out to be the answer.  Cate, a Canadian student, took up flamenco, previously having danced contemporary and jazz, as a challenge to help her through a difficult time when her father (now thankfully recovered) was diagnosed with cancer.  There are others who started flamenco as children but gave up either when they became stroppy teenagers or when they went off to university.  Among these is a dancer who watched Carlos Saura’s Carmen every day when she was five years old.  She’s playing Carmen tonight.

Then there are the people who have always wanted to dance but haven’t had the means, the opportunity or the time to do it until they were all grown up.  One lady who started dancing just ten months ago at the age of 52 told me that she felt malcoordinated and out of place at her first class, but once she’d got into the swing of it she knew it was for her.  Nathalie, a friend who grew up in the south of France, within striking distance of an annual gypsy festival, had no formal dance training until she was 40.  She would spend hours as a child pretending to dance like the girls at the festival, but there were no classes locally – flamenco was, at the time, unfashionable and no-one could understand why she so wanted to stamp her feet.  It wasn’t until she had moved to the UK and had a family and a successful career that she finally fulfilled her childhood dream of dancing flamenco.  Ten years later, she’s still dancing with the same joy that she had as a child.

A dancer from Japan said that she had seen a five-minute flamenco slot on a TV show in her home country.  Instantly she thought, “That’s mine,” and went off in search of classes.  It was the first time she had seen flamenco and she hasn’t seen any on Japanese television since then.  Japan seems to be flamenco’s second home these days.  There are plenty of classes available and many of the top dancers from Spain take their companies to Japan to tour and to teach courses.  Another Japanese dancer was first attracted by the costumes – a theme that was quite common among the people I spoke to.  She loves the music and the dance, but is always thinking about her next flamenco dress and how she will make it, to the point where she is planning to launch her own flamenco design label.

I heard of another student whose flamenco story could have been taken from the pages of Victoria Hislop’s novel, The Return; her father had left Spain because of Franco’s regime and she knew that flamenco was something she had to do at some time in her life, just as a poke in the eye to Franco.

The overriding theme among everyone who told me their story was this: once flamenco has you, it has you for life.  No matter what age they were when they got hooked, no matter how impractical taking lessons or going to shows was at the time they first saw it, they eventually found a way to get involved, even if it was many years later.  One dancer, who didn’t start dancing flamenco until the ripe old age of 22, said, “I always thought I was too old to start, but I soon found that flamenco is the one thing that you can actually get better at as you get older! It takes years to develop an understanding, an appreciation and your own style. You can never stop learning, flamenco is a journey.”

This website uses cookies to improve your experience while you navigate through the website. Out of these, the cookies that are categorized as necessary are stored on your browser as they are essential for the working of basic functionalities of the website. We also use third-party cookies that help us analyze and understand how you use this website. These cookies will be stored in your browser only with your consent. You also have the option to opt-out of these cookies. But opting out of some of these cookies may affect your browsing experience.
Necessary Always Enabled

Any cookies that may not be particularly necessary for the website to function and is used specifically to collect user personal data via analytics, ads, other embedded contents are termed as non-necessary cookies. It is mandatory to procure user consent prior to running these cookies on your website.